From single components to complex fluid handling systems we have the products, expertise, and resources to meet your needs.

Learn a little about flow curves, and you'll get the best performance

When we talk about matching a pressure regulator to the job, one of the primary tools is the flow curve. If you learn a bit about flow curves and how they work, you'll feel a lot more confident when you talk to your Swagelok representative about your needs. 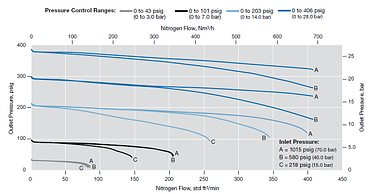 How to read a flow curve

In an ideal world, you'd want the curve to be a flat line: No change in pressure no matter what the flow rate. In the real world, that's not possible. Each regulator has its limits.  Remember, it's a pressure regulator, not a flow regulator. Flow is controlled by a valve or flow meter. When the flow rate gets high enough, the curve on the right side of the graph will start to slope downward. That's called "droop." If you operate a regulator in that zone, you'll get a relatively large pressure drop downstream. Go far enough to the right and you end up with "choked flow." That means the regulator is wide open and is no longer controlling pressure.

At the far left of the graph, you'll see a similar change as the line comes down sharply and flattens out. That's called "seat-load drop" or "lockup," another area where the regulator has a hard time maintaining pressure.

What you want, then, is a regulator with a relatively flat flow curve in the range of pressures and flows where you intend to operate it. Each Swagelok pressure regulator has its own flow curve. Look at the conditions under which you plan to operate the regulator, and mark them right on the flow curve graph. If your numbers are far to the right or left where the line is no longer close to flat, look for a regulator model that is better suited for your specs.

Here's one more term to learn: Hysteresis. Basically, reading a flow curve left to right shows what happens as flow increases. When flow decreases, you would read the curve from right to left. But the curve doesn't follow exactly the same line when flow increases as it does when flow decreases. The difference between the two is called hysteresis. It's a good practice to use pressure gauges in the system to help fine-tune regulator settings.

As with many pieces of machinery, there are also a few things you can do to get better performance out of a pressure regulator. That is, you can flatten out the flow curve a bit.

For 50 years we have provided professional support and an extensive local inventory of Swagelok products. We offer custom solutions, applications support, training, equipment, and tools to help ensure safe and reliable operations.

Learn More About Us

Proud member of the Canadian Council for Aboriginal Business since March 2022. We understand our responsibility towards supporting the interests of the aboriginal communities, and we are working towards establishing that.